Hi everybody! So with the new posts there's going to be a lot of different stuff posted on here. I don't have very much time to read anymore (so sad, I know) and so all the posts I'll be doing will be about things that I do during the day and feel compelled to share my knowledge or experiences with everyone. So today's post will be about hair care (kinda boring lol sorry).

In the middle of winter a girl's can dry out. Pretty bad. To the point of snapping in half when you bend it-like mine was or is. So with the technology we have today I decided to peruse Pinterest for some hair masks. Amid the many many many pins there was one recipe that was everywhere and that was: Coconut oil, olive oil, and raw egg. Now I had tried the coconut oil and it was working but not to the extent that I would have liked and olive oil didn't sound so bad but the egg...now the egg was a different story. I really really did not want to pour raw egg in my damaged hair but I was desperate (and very very bored) so raw egg it was. After warming up about a tablespoon each of coconut and olive oil I cracked the egg and poured the concotion all over my scalp. Gross. Ew. Disgusting. Blech. Shudder shudder cringe. Worst mistake of my life.
The coconut oil and olive oil were fine. The egg? Not so much. As soon as it touched my scalp my skin shriveled up, no joke. Wherever the egg touched on my hair instantly dried into a hard clump of nasty hair. After I left it on for about an hour and a half (thanks to the insistence of my loving husband who didn't want me to waste one of his eggs) I washed it off and after the shower my hair was softer but almost to the point of feeling greasy.
My overall feeling about this hair mask is: coconut oil and olive oil was awesome. I will definitely be using them again. The egg, though? Never in a million years. Ever.

Alright guys I know I've said it multiple times but this time it's for real. :) 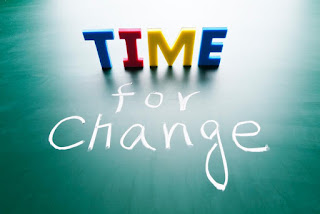 It's time for a change. I'm going to try to start blogging more regularly and it's not going to be just about but anything and everything, starting with your suggestions. Anything you would want to see me review or post on my blog email me at themaniacalbookworm (at) gmail (dot) com or comment in the comment box! I look forward to hearing from you all and thank you for being so patient with me as I get everything situated.

Should We Provide Jobs for Welfare Recipients?

Hey all! I know it has been a while but with school and work and wedding planning I've been a tad busy. I hope everyone is doing well and I hope you know that I feel bad not posting anything for such a long time but life has a funny way of keeping you busy as I am sure you can all relate; however, I was thinking about what if I started posting some of the papers I have been writing for college? (you will notice that my writing sounds a tad bit more professional now lol college has ruined me) So here is a paper that I wrote for my English class talking about providing jobs for welfare recipients. It is a little lengthy but I hope that you take a look just the same :) *Bookworm Out*

“If they was to cut out all this welfare like they’re talking about…they can’t starve people to death and they can’t put everybody to work. It’s just not there.”


By reforming the welfare system and providing jobs for those able to work, the economy of America will be in a better position, and the $668 billion dollars that we are currently spending to support families will be drastically reduced while still providing more than enough exceptional help for those unable to work. We can cut the welfare and we can create jobs for everyone. Doing such is a hard but not impossible task. No one will starve and in the process, America will become the great nation that she once was.
Posted by Unknown at Monday, April 27, 2015 No comments:

New Product review! Because, face it, we all love a new product. Especially if the product is a beauty product. ;) I'm here to review the new, the one and only, Gillette Venus Snap! (in its own little travel case, btw)

This nifty little razor is about 4 inches long with five blades on one end surrounded by a blue ring of skin moisturizer that allows you to shave without shaving cream. Simply wet the razor and go! The best part about the VSnap is that it comes in its own little carrying case that's small enough to fit in a purse or backpack allowing you to take care of those pesky little hairs you missed in your morning rush. I seriously don't think I can ever go back to a regular disposable razor that requires gobs of shaving cream and multiple shavings to get it all. For me, Venus Snap is the only way to go. :)
#InASnap
Posted by Unknown at Tuesday, June 03, 2014 No comments:

Email ThisBlogThis!Share to TwitterShare to FacebookShare to Pinterest
Labels: #InASnap 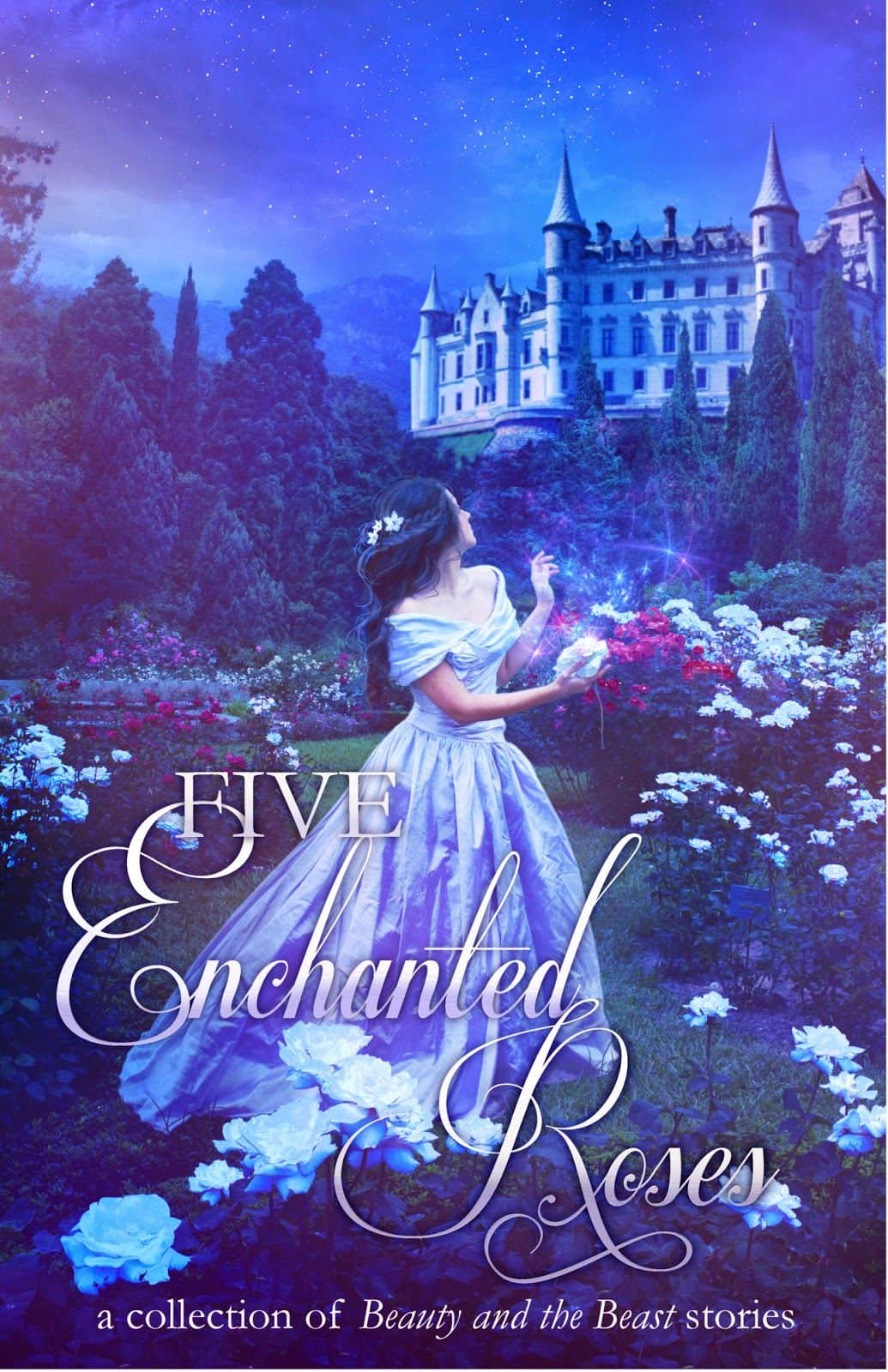 
FIVE ENCHANTED ROSES
a collection of Beauty and the Beast stories

The challenge is to write a retelling of the beloved fairy tale in any genre or setting you like. Make certain your story is recognizably "Beauty and the Beast," but have fun with it as well. Make it yours!

Rooglewood Press will be selecting 5 winners to be published in the Five Enchanted Roses collection, which will be packages up with the gorgeous cover you see displayed above. Perhaps your name will be one of the five displayed on this cover?

All the contest rules and information may be found on the Rooglewood Press website. Just click HERE and you will go directly to the site.

Rooglewood Press's first collection, Five Glass Slippers, is available for pre-order now and will be released on June 14th. Grab yourself a copy and see what these talented writers have done with the timeless "Cinderella" tale!

Cover Credit:
This cover illustration was rendered by Julia Popova, "ForestGirl." You can find more out about this gifted artist on her website, http://www.forestgirl.ru/ 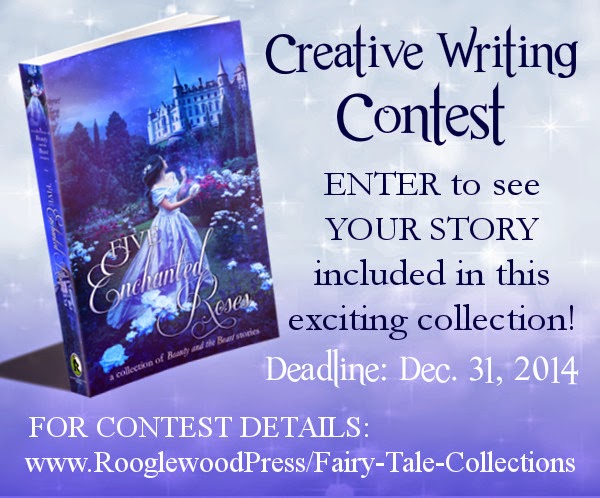 Below the Surface by Tim Shoemaker

BELOW THE SURFACE by TIM SHOEMAKER 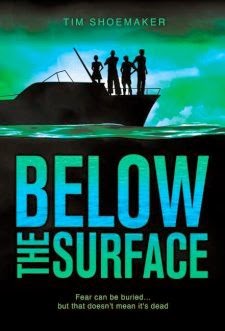 My Rating: @@
# of Pages: 397 (hardcover)
Inappropriate Scenes: None
Swearing: None
Genre: Middle Grade YA
Publisher: Zondervan

Back Blurb:
Buried fears don’t stay buried for long. Something is wrong with Cooper. He doesn’t understand it, and he won’t admit it, but after surviving the trauma of abduction, Cooper is plagued by a deep fear he can’t control. A vacation aboard the restored Getaway with his friends is just what he needs. No drama, no mysteries, just fun, relaxation, and a few well-planned pranks. But trouble follows this crew, and the idea of a carefree vacation soon disappears along with a missing woman. The police think she drowned, but Hiro has her own suspicions and starts investigating, while Cooper keeps busy and hides behind his practical jokes. But fear has a way of rising. A prank gone wrong, a dark water dive, and the four friends find more than they bargained for - just below the surface.

My Review:
I received this book from Book Look Bloggers in exchange for an honest review. I mostly got this book for my brother who loves the series. I enjoyed the first book in the series but for some reason I couldn't get into this book. It didn't grab my interest at all. Maybe it was because it was below my age level, I don't know. The plot didn't make sense. It seemed to me like this kid dived into the water and he got scared because it was so dark under the water. That's what the first couple of chapters were about. I hate to say I didn't like the book because I feel like there needs to be more clean books out there for kids and I would like to support Tim Shoemaker as much as I can because being an author cannot be the easiest profession. So I will recommend this book to other kids that are younger than me because they will probably like it. I know my brother did, it just wasn't for me.
Posted by Unknown at Tuesday, May 13, 2014 No comments: